Since the coup on the 22nd of May, 2014, Thai people have been forced to live under the control of junta government (military dictatorship). The military government has been exercising extreme and incontestable state power to silence and control us for 6 long years.
We refuse to tolerate the cruelty and incompetence of the rulings any longer.

Speaking up costs us a lot of things in this country. Brave activists and students who have come forward to voice their rightful critique against the junta have faced dire consequences—some were threatened, some were attacked, and some were forced to disappear. Freedom of speech and expression, our inalienable birthright, has been stolen from the people by the junta by violently cracking down on dissent, actively enforcing media censorship, and banning public gatherings.
The current constitution, drafted under the heavy influence of the military and enacted in 2017, allows authoritarianism and abuse of power to thrive even further—at the price of thai people’s liberty and basic human rights. The law and the corrupt justice system has been weaponised by the military to serve the ruling class and demolish the less fortunate.

We need your attention.
Since speaking the truth here may cost us our lives and those of people we hold dear, we need help and support from the global citizens to spread our words and let our voices be heard.
The world needs to know what really is happening in Thailand.

to understand in your language 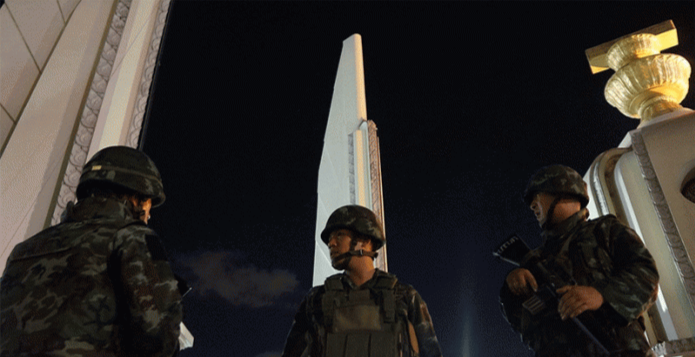 191 protesters were monitored by National Council of Peace and Order (NCPO) during the election.732 people were charged for violating NCPO’s order and the Act which bans public gatherings.The charges of Act 112 have not increased but the government used other laws to threaten the dissidents (It is known that the Article 112 is used to put dissidents in jail but other Articles such as Emergency decree, Cleanliness and Orderliness of the Country Act 1992, the Computer Crime Act are used to stop dissidents from speaking up or protesting).“Silencing” dissidents with the charge of section 116 of criminal code, “sedition”.At least 197 civilians were charged with Computer Crime Act from speaking up about politics online.42 civilians were charged with the Computer Crime Act under NCPO, in which 37 of them were accused of spreading false information and 28 of them were accused of misleading information about the outbreak (COVID-19). 162 civil cases were transferred to the military court.53 were held captive in military prisons in Nakhon Chai Si and Thung Song Hong.104 people seeking political asylum in foreign countries after being unlawfully summoned by NCPO, threatened by the military authorities or charged with Act 112 or weapon-related charges.6 possible enforced disappearances were reported, 3 were associated with the Thai Federation group.

10 Demands for Reforming the Institution of the Monarchy

Prachatai (www.prachatai.com) is an independent, non-profit, daily web newspaper established in June 2004 to provide reliable and relevant news and information to the Thai public during an era of serious curbs on the freedom and independence of Thai news media.

Thai Lawyers for Human Rights Thai Lawyers for Human Rights was established on 24th May 2014, two days following the coup in 2014, by a group of human rights lawyers and social activists. Initially as an ad-hoc organization, TLHR aimed to provide legal and litigation assistance to individuals who had been summoned, arrested, and detained by the military as a result of the 2014 coup.

Thailand has the highest number of successful coups d'état in Southeast Asia.

A Total 21 coup attempts13 successful and 9 unsuccessful coups in just over a century.one of the world's top ten countries with the most coups d'état and coup attmpts
THE MOST RECENT COUP, IN 2014, WAS LED BY GEN. PRAYUTH CHAN-O-CHA, WHO TOOK POWER AS THE JUNTA LEADER FOR 4 YEARS, AND IN 2019, THROUGH RIGGED ELECTIONS AND INVOLVEMENTS OF THE ELITES AND THE PALACE, HE BECAME THE PRIME MINISTER OF THAILAND 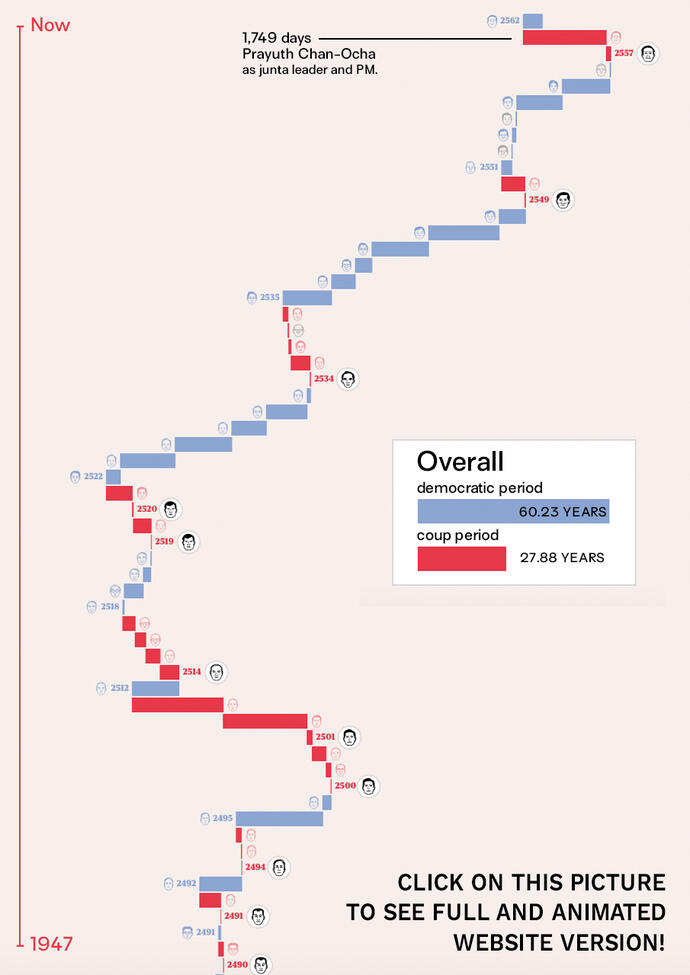 Due to disagreements in the parliament that stemmed from allegedly radical economic policies presented by Pridi Panomyong (a prominent member of Khana Ratsadorn, revolutionists who changed the regime from absolute monarchy to constitutional monarchy in 1932). Phraya Manopakorn Nithitada, the PM, dissolved his own parliament and claimed the government anulled. He seized all the executive power by citing the monarchial power and royal decree.

Lieutenant Genernal Phin Choonhavan led the coup to seize the power of Rear Admiral Thawan Thamrongnawasawat’s government. Six reasons were declared as the object of this coup; scarcity of consumer goods, post-world-war economic distress, inefficient governance, unrest, mysterious death of Rama XIII, and dissatisfaction of the army due to a retirement policy. This is the end of the Pridi-led political influence.

About one month after the Declaration of policy and gaining trust of the Parliament, on April 1948, 6th, former Prime Minister Kuang Apaiwong was forced to resign within 24 hours. The coup, again, led by Lieutenant General Phin Choonhavan, blamed Mr.Kuang for his government’s ineffective strategy to solve high-priced customer goods. This event has been named as ‘The ouster of the Prime Minister’.

“The temporary government” led by General Phin Choonhavan and other 8 members, who were also the members of the 3rd coup, had revoked a current edition of the Constitution (as known as Royalism edition), and announced the seizure of his previous government. By asserting that the government had failed to solve the corruption problem, and been intervened by communism, the coup had re-enacted the first edition of the Constitution and assigned Field Marshal P. Pibulsongkram as a Prime Minister.

The force led by Field Marshal Sarit Thanarat—commandant of Thai Royal Army—had taken control over Field Marshal P. Pibulsongkram, and dissolved the House of Representatives. There was a Royal Order to appoint Field Marshal Sarit Thanarat as a ‘Military Keeper of the Capital’. This coup had shifted the way Thai democracy should have been, regards to intention of the Siamese Revolution of 1932—ending absolute monarchy under King of Siam, led by Khana Ratsadon (translated as “People’s Party”). Since then, the Thai monarchy has been revived (after their role had been reduced after the Siamese Revolution of 1932), which has significantly influenced politics in Thailand until now. At that moment, Thailand had been brought into the era of a completely military dictatorship, as known as Sarit’s rule.

Field Marshal Thanom Kittikachorn announced the formation of 9 junta members, headed by himself, as “The Revolutionary Council” to dictate nation’s affairs following the abolition of the current edition of the Constitution, Parliament, and Cabinet. Regarding the inability to persuade the governmental votes towards Field Marshal T. Kittikachorn and disagreement within his political party (the United Thai People’s Party or “Saha Prachathai”), “The Revolution Council” suggested that that the government was intervened and corrupted by some group of people to which the coup had to put an end.

The coup, headed by Admiral Sangad Chaloryu as “the leader of Reformation Council of Nation’s Government”, claimed that there were students displaying a contempt of the Thai monarchy. In the morning of October 1976, 6th, at Thammasat University, the students were attacked, by armed police officers, in order to force their demonstration to stop. 39 dead and 145 injured people were officially reported. According to the website “Documentary of 6 October” (accessed by: https://doct6.com), this is the biggest gory incidence that has happened in Thailand’s history, which has been known as “Thammasat University Massacre”.

Admiral Sangad Chaloryu as “the leader of Revolutionary Council”, again, led the military force to seize the power of Mr.Thanin Kraivichien’s government by suggesting the purpose of this coup that the constitutional election was not appropriate to the current situation, where there was the disagreement between citizens and officials, and the democratic governance did not show the significant outcome. As a result, the current Constitution, Parliament, and Cabinet were abolished over again, and all political demonstrations were restricted. The training of The Village Scout of Thailand—the right-wing, ultranationalist, paramilitary volunteers from rural areas of Thailand who had played an important role to attack against the students in “Thammasat University Massacre”—was brought back. 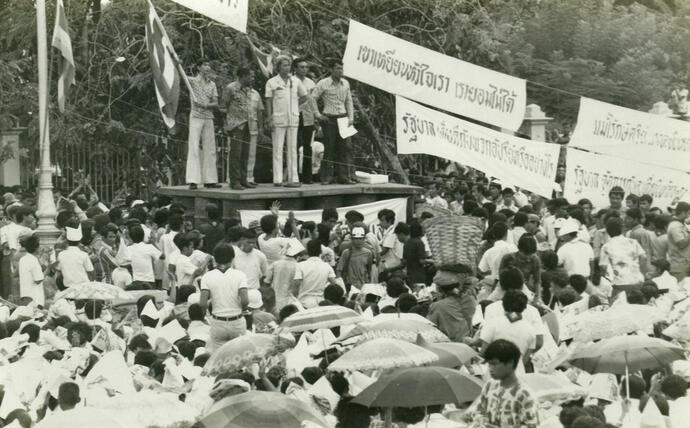 The Village Scout of Thailand

The military force in the name of “National Council of Peace and Order”, headed by General Soonthorn Kongsompong, seized the power of Chatchai Choonhavan’s government. Five lists were declared to be the cause of this coup; corruption, politicians oppressing officials, destruction of militaries, distorted investigation of monarchical abolition’s case, and “parliamentary dictatorship of the government”— which was the word invented in order to demonise the democratic government at that moment. Again, the current Constitution, Parliament, and Cabinet were abolished as a result. Martial Law was also nationally enacted.

“Revolutionary Council of Constitutional Monarchy”, led by General Sonthi Boonyaratglin, seized the power of Mr.Thaksin Shinawatra’s government. Three causes were claimed to be the motive of this coup; corruptive governance, independent organisations being intervened, contempt of Thai Monarchy. Moreover, the force enacted the Martial Law, and abolished the current Constitution, Parliament, Cabinet, and Constitutional Court. Political demonstrations were also illegal. 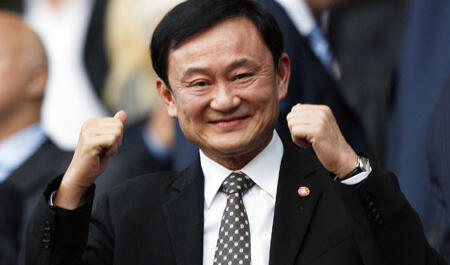 2014 - On the second day of the meetingset up by the army in order to come to a political common ground, there was serious disagreements among groups of protestors, mainly between; People’s Democratic Reform Committee (PDRC) and United Front of Democracy Against Dictatorship (UDD). General Prayut Chan-o-cha decided to leave, and at 17:07 on the same day, he and his force (known as “National Council of Peace and Order” or NCPO) staged a coup, and enacted the Martial Law. All television channels (except one channel; The Royal Thai Army Radio and Television) and political demonstrations were cut off. The Constitution and Cabinet were revoked. Moreover, in order to prevent the opposition to NCPO, online news and social media have been regularly censored. Hundreds of Thai citizens have been summoned to “fix their attitudes” if they have showed a sign of disapproval of the junta. 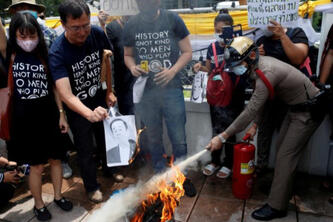 Everything we know about King Rama X of Thailand 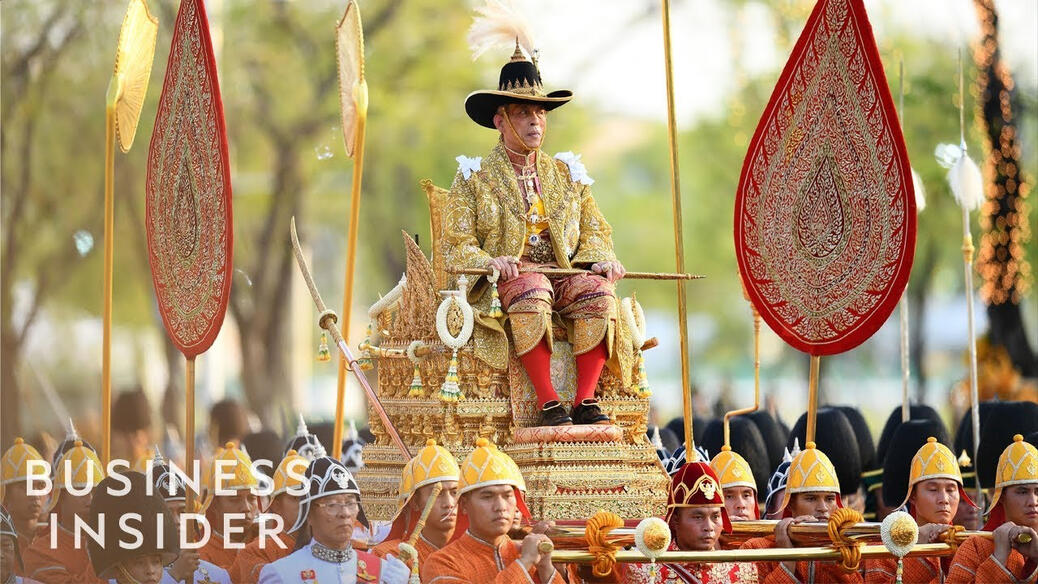 Thai anti-government protesters rally in the thousands, as challenge to the once-untouchable monarchy grows 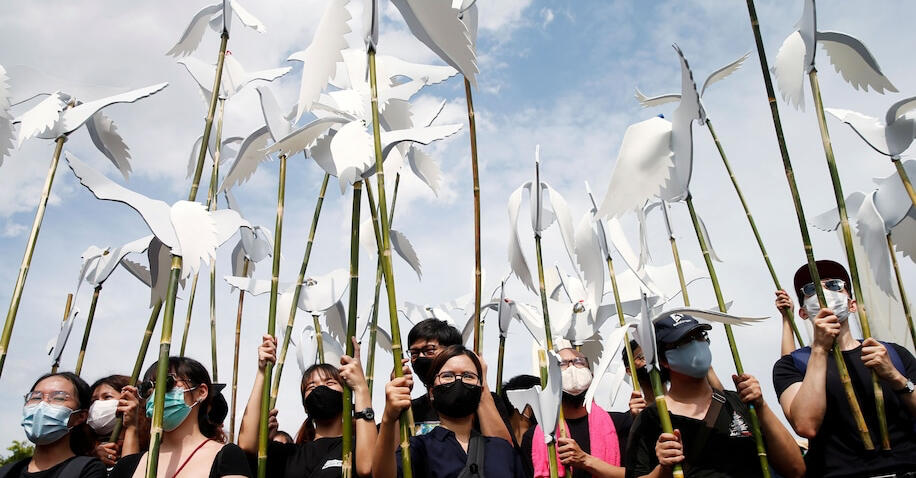 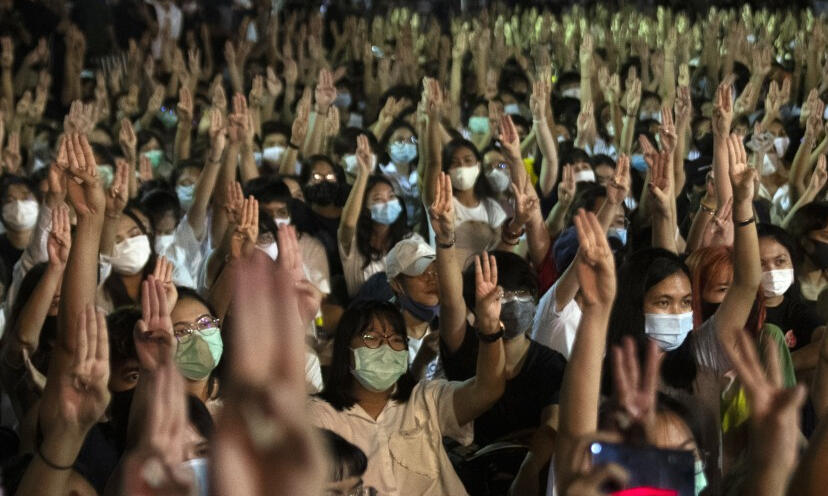 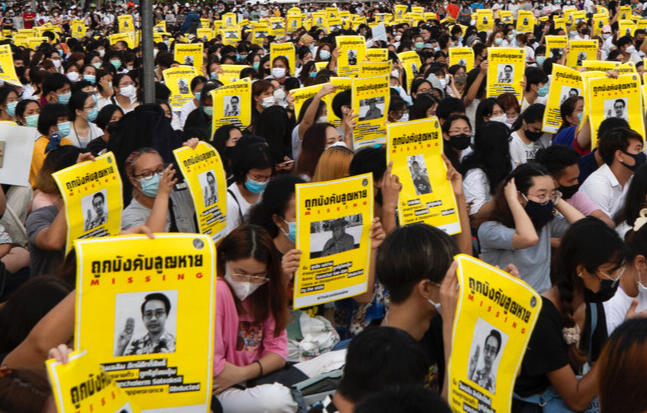 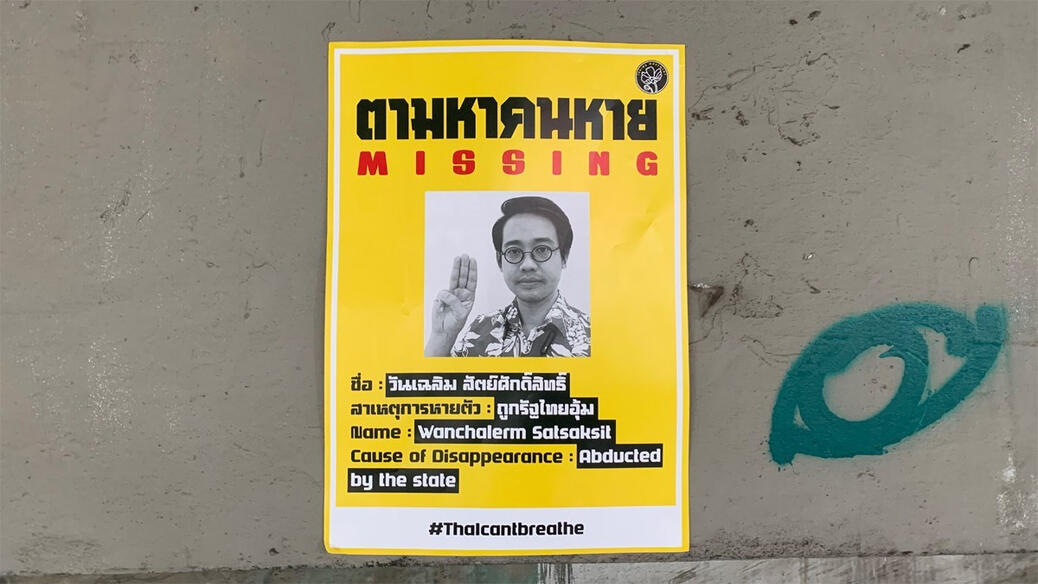 A Brief Oral History of the 2014 Military Coup 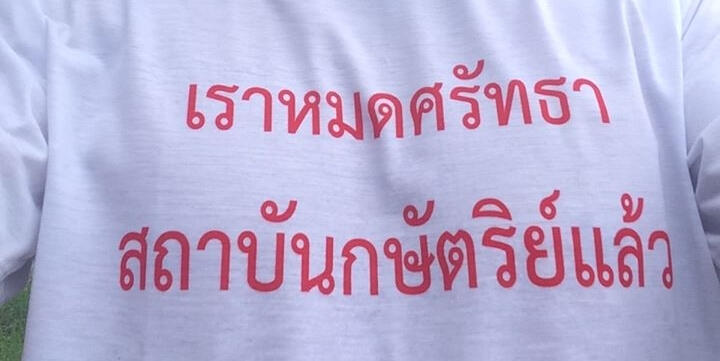 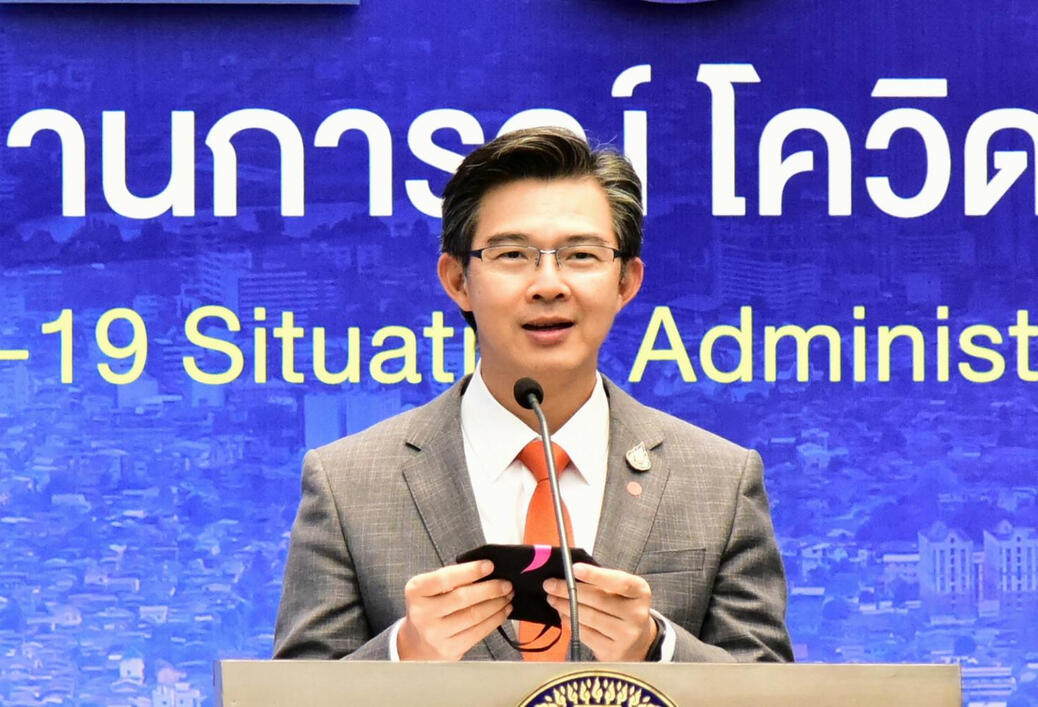 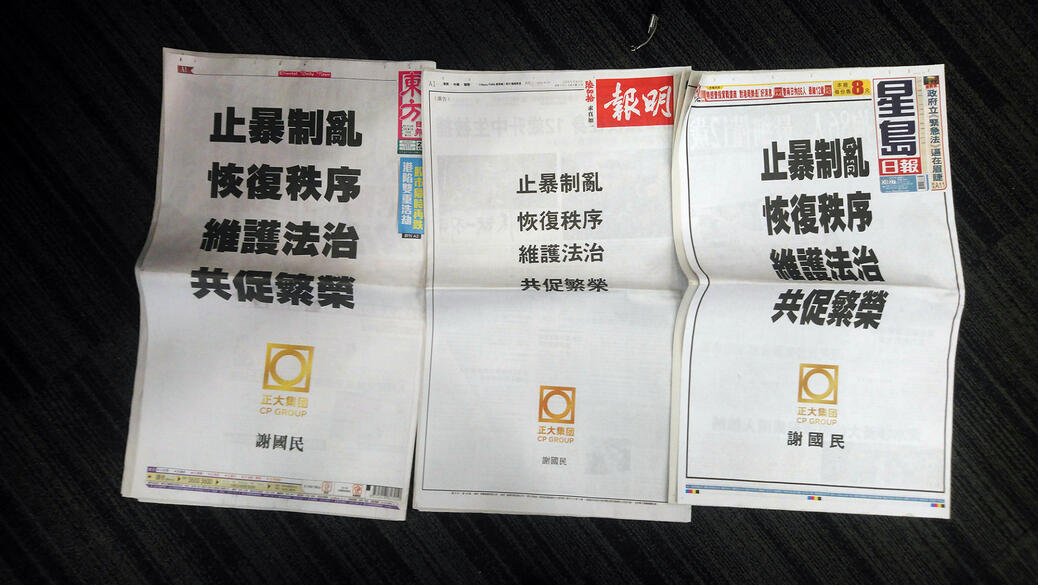 MP stays in pursuit of Prawit and forest foundation 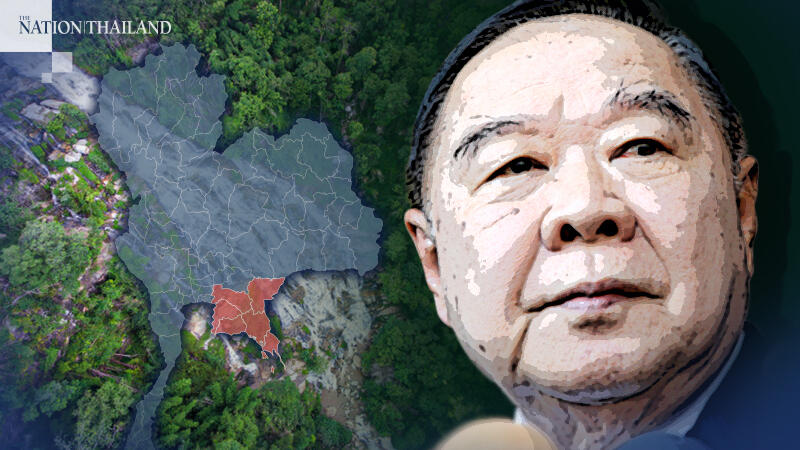